When And How Will Covid 19 End In The World?

Latest Corona Virus Update clearly shows still countries are struggling to get rid of this pandemic. As many as 3,676,469 cases of Corona Virus are reported worldwide with 2,53,473 total deaths till date ( as on May 5, 2020, as per Worldometer). The figures are frightening and worst is that, it’s still increasing. Though the countries like USA, Spain, Italy are seeing curve going down but the case is different when we talk about a number of other countries including Russia, India and several other countries.  This brings a very obvious question in mind:

When And How Will Covid 19 End In India And Other Countries In The World?

You might be thinking why we are saying if it would be possible to develop the vaccine for the simple reason there are few such diseases that are still non curable. The first in the list is HIV.

Almost 4 Decades Are Gone And After Claiming 32 Million Deaths, Still HIV Vaccine Is Not Available.

Don’t you think this is frightening? Yes it is! From where did HIV virus originated? You must be shocked to know HIV virus is believed to come from chimpanzee. Yes, scientists in their study, found a species of chimpanzee in West Africa the source from where the virus is transmitted to humans.

The study says immunodeficiency virus also known as SIV or Simian Immunodeficiency Virus came in contact with humans and mutated into deadly HIV. It happened when humans killed and ate these chimpanzees. This virus first spread in Africa and later to all parts of the world.

Just like HIV, Covid 19 is also believed to come from bats and so the risk is more. May be that’s the reason why WHO said, it is likely that there won’t be any vaccine for Covid 19 [source: Economic Times]. It is noteworthy that, as many as 100 or even more vaccines are under pre-clinical trials and even many are even ready to be tested on humans, still many health experts have asked what if we have to live with Corona Virus.

As per Dr. David Nabarro from WHO’s Coronavirus special envoy, there are few virus infections that are still spreading as their vaccines are not available till date. In such a scenario, it’s not possible to make an absolute assumption that we will be able to get vaccine for Covid 19. Even if developed, it’s not sure, if it is able to meet all safety and efficacy test standards. As per a CNN report, the worst case possibility is that there’s no vaccine for Covid 19.

When And How Then Covid 19 Will End?

Speculations, assumptions, studies all are going on, but there seems to be no similarities. May be that’s the reason why no one is risking to say anything. Researchers in Singapore have though developed a mathematical model on the basis of the way spread, cases and recoveries are made of Covid 19. They have suggested by 22 May India is likely to witness 97% decline in the Covid 19 cases and later by 26 June, it is likely to end in India. 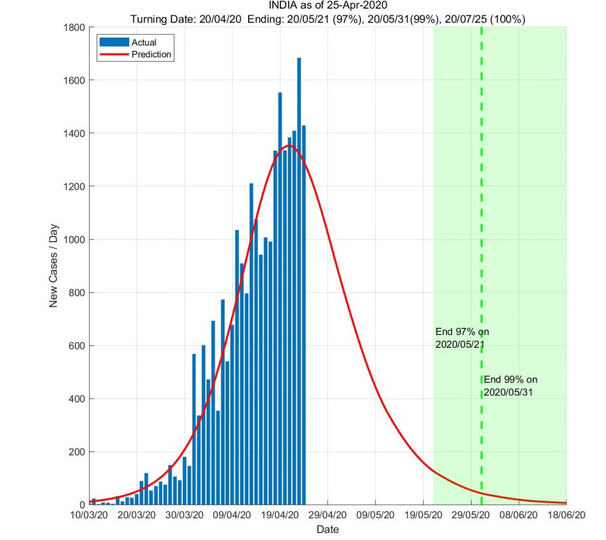 These are the dates this report has suggested for various other countries:

The reason of putting this study by Singapore is that, already the dates are gone; the study seems to be inaccurate. Already it’s May 5 and Germany is struggling like other countries.

The situation is alarming due to number of wrong decisions as well like opening of liquor shops that is destroying all efforts of government so far. It is believed the next month is likely to see great spike in the cases and deaths are already high in last 2 days.

Israel Has Developed Antibody Against Corona Virus or Covid 19

The good news is, Israeli Defense Minister Naftali Bennett today announced the development of antibody or passive vaccine to get rid of Covid 19. The antibody is developed by the Israel Institute for Biological Research (IIBR). It is now going to be offered for patent and soon the facilities are going to be developed for its mass production. The first production facility is going to be set up in Southern Town of Yeruham.

Thus, all countries are working hard on developing vaccines or antibody and it gives a sign that it is likely to get over. Current situation points out that, the situation is likely to be controlled in almost 30 days and by July, countries and humans are believed to back to normal.