Nuclear power has been suggested as a solution for renewable energy supply that does not emit CO2. Nuclear power is not really a renewable energy source. The environmental consequences of nuclear generation are serious issues that must be addressed, particularly until decision is taken to construct further power plants. Since nuclear energy plants do not emit carbon dioxide, it has been dubbed a “natural” source of electricity (Petraglia et al., 2020). This is right, but it is misleading. While nuclear energy plants do not release carbon dioxide when in use, large quantities with carbon dioxide were released during the construction and plant operation. Uranium is used to power energy plants. Uranium extraction emits a lot of CO2.

While new nuclear energy plants are installed, emissions released into the atmosphere. Finally, hazardous waste transportation emits carbon dioxide. The current research discusses the major concern related to environment and pollution issues which get increase due to nuclear energy and its plants. Until now, fossil fuels along with hydropower have been used to meet the growing global electricity consumption to a greater degree (Popov et al., 2018). Nuclear fusion has been produced and used widely for almost 2 decades to satisfy a small portion of the world’s electrical energy requirements. The overall study is focused on understanding about the multiple elements including radioactive energy which are commonly used in various regions of the globe to produce and distribute sufficient power to people.

Low amounts of radiation are continuously released into the atmosphere from nuclear energy plants. The results of persistent lower levels of the radiation are a source of disagreement between scientists. As per Enríquez-de-Salamanca (2018) several research studies show that people that live around nuclear plants do have higher risk of cancer. The extent of damage caused by lower levels of the radiation to wildlife, trees, as well as ozone layer remains unknown. More analysis is being conducted for determining the extent of environmental damage caused through low doses of radiation. The issue of radioactive waste has been considered as the major concern factor. Nuclear waste has the potential to be active for many years. According to Abashidze et al., (2020) most of the wastage that is radioactive from nuclear power stations is now being deposited at plant. Because of space limits, the nuclear waste would have to be moved at some stage.

MUST READ: Advantages and challenges of extracting manganese nodules from the ocean floor under technical, ecological and economic considerations – Sample

Burying hazardous waste has a number of drawbacks. Large vehicles will carry the waste. The nuclear waste might leak throughout the case of the accident. Another concern is whether containers would overflow after waste has been deposited. As per Pesqueira et al., (2020) it has analysed that there is currently no remedy of toxic chemicals. Some scientists believe that constructing more nuclear energy plants and then thinking about how to dispose of that wastage later could lead to a risky result. As a solution to global warming, a growing team of scientists has suggested replacing fossil fuel stations over the world with nuclear reactors. Several others recommend that nuclear power be expanded to meet up over 20% of total energy requirements. Through the planning stage to construction, the nuclear power plant usually takes 14 years to build.

As per World Health Organization (WHO), approximately 7.1 million people has die every year because of air pollution, including emission pollution accounting for more than around 90% of these are deaths. As the study result, converting energy supply to nuclear could lead to the deaths of almost 93 million people while they are waiting for the proposed plants to be constructed in all-nuclear scenario. As per Portugal-Pereira et al., (2018) nuclear technology has traditionally expanded nation’s opportunity to integrate or extract plutonium and enrich uranium for nuclear weapons use. This is acknowledged by IPCC (Intergovernmental Panel On climate Change). Operational threats and safety challenges, risk of uranium mining, financial along with regulatory risks, problem of unresolved waste management, and negative public opinion are all barriers that are associated with increased nuclear usage of energy.

The development of nuclear energy plant in a nation which does not already have one requires the nation to import plutonium to be used within reactor. The nation will refine uranium under secret to make high-grade uranium and extract plutonium through rods of uranium fuel for use in the nuclear weapons whether it so desires. Frantál and Malý, (2017) stated that since uranium mines produce gas of natural radon, which contains carcinogenic decay agents, uranium mining induces lung cancer which is considerable miner’s number. Between years 1950 to 2000, approximately 405 miners of uranium miners are died because of lung cancer and six times the rate predicted based on the smoking rates separately, according to a survey of 4,000 miners of uranium. A total of 61 people died as a result of the lung diseases caused by mining.

To protect the environment, the world’s reliance upon fossil fuels should be reduced quickly in order to minimise emission of greenhouse gas. Nuclear power becomes low-carbon but can be installed on a wide scale inside a short period of time, providing the world by clean and sustainable electricity. Climate change can be defined by United Nations also as most systemic humanity threat (Morgan et al., 2018).  Despite this, energy-related carbon emissions keep going up, hitting a record maximum of 33.1 billion tonnes throughout 2018, but have risen by upwards of 40% since the year 2000.

As per Paris Agreement of 2015 their main goal is to maintain global temperature rises far below 2 degrees Celsius relative to pre-industrial times, with a goal of 1.5 degrees Celsius. The expert opinion is that reducing global warming to 1.5 degrees Celsius will greatly minimise the threats faced by global warming. Over the last 20 years, collective efforts initiatives have raised the amount related to energy produced through wind, renewable energies and solar, but they have not succeeded in reducing fossil fuels again from mix (Lee et al., 2017). As per 2017 facts, fossil fuels provided more energy than before in both absolute relative terms. 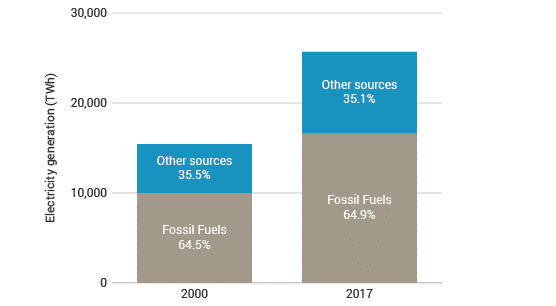 Experts also agreed that even without a greater position for nuclear power, achieving the deep emissions reductions needed to maintain the annual warming trend below 1.5°C which would be much more difficult. Nuclear power will replace plants of fossil fuel because it is efficient and so can be installed on a wide scale, preventing fossil fuels combustion with electricity. In the current time use of the nuclear technology prevents pollution equal to eliminating one-third vehicles from the lane (Beresford et al., 2020). Electricity has become increasingly important in modern existing society, with demand rapidly rising as transportation, household heating, and manufacturing processes become more electrified. Although electricity is renewable at usage point, it actually accounts for more than 40% related to carbon emission of energy.

The change in the climate and its plan would include decarbonising the energy market while still offering sustainable and efficient electricity in increasing global population. Years before environment change was a concern, nuclear technology demonstrated its ability to be a tool for achieving renewable energy transformations. France gets more than 70% of its energy from nuclear energy; the highest share of nation in the world, as well as its electricity industry emits European average with approximately one-sixth (World nuclear association, 2021). Nuclear energy or power has gone through minor position within French electricity grid to supplying the bulk of the country’s electricity in only 15 years, demonstrating that nuclear generation can be increased at the rate necessary to successfully tackle climate change.

MUST READ: A Detailed Assignment On The New Trends In Social Media From The State Uttar Pradesh – Sample

The research has concluded that the entire operational risk, and other waste management problems, is central to nuclear power production process. This process of producing energy from nuclear power seems to be very cost-effective, that limits the likelihood of using some available financial reserves to manage the management system that will control the impact of radioactive waste. It has also concluded that taking effective ways and strategies to overcome the environmental issues is important so that further climate and environment can be protected.

The authorised committee was asked to look at strategic and structural options in order to keep nuclear energy as the viable choice within future. The advanced reactors were currently being developed or designed. Such plants have been planned to be smaller, and if layout objectives are reached, they would be better than current reactors. On the other side, the advanced reactors’ architecture criteria are strict than that of some NRC’s safety target policy (Nazir et al., 2019). Through handling waste in a particular manner, the risk of damage to nature and the environment is reduced. Nuclear waste could also be processed throughout the medical field, because it is used as part of a patient’s treatment or as a procedure. In terms of the benefits regarding nuclear waste, that could be used for effective balance to produce value and build technological maturity while safeguarding human health, protection, education, and, most notably, the environment or climate. 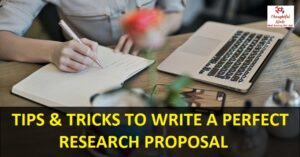 Street-smart Tips and Tricks to Formulate a Powerful Research Proposal